With the release of EA’s third iteration of their popular UFC franchise just weeks away, more and more details about the title are beginning to leak out.

We already know that, for the second title in succession, Conor McGregor will grace the cover — though this time without Ronda Rousey sharing the prestige with him — but in terms of what you can expect when you put the disc into your gaming systems and take the reins of the UFC lightweight champion, it was a mystery.

EA has released the attributes for several fighters in the featherweight and lightweight divisions (McGregor is also playable at welterweight, by the way) and it won’t come as a surprise to many that Conor McGregor is listed as the best striker in both the 145-pound and 155-pound weight classes. 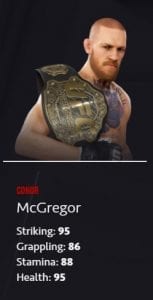 In the lightweight division, Edson Barboza comes closest to McGregor with striking score of 94. Donald Cerrone, Nate Diaz, Tony Ferguson, Anthony Pettis and Dustin Poirier are all also listed in the low 90’s. McGregor also outscores Bruce Lee for striking skills, as the martial arts legend was ascribed a score of 92.

EA UFC 3 is due for release on the PlayStation 4 and Xbox One platforms on February 2nd.