The MacLifestyle :: Blow Past Your Breaking Points with the 40% Rule
Press enter to begin your search
Lifestyle

The MacLifestyle :: Blow Past Your Breaking Points with the 40% Rule

When your brain tries to tell your body you’re done, you’re really only about 40% done. 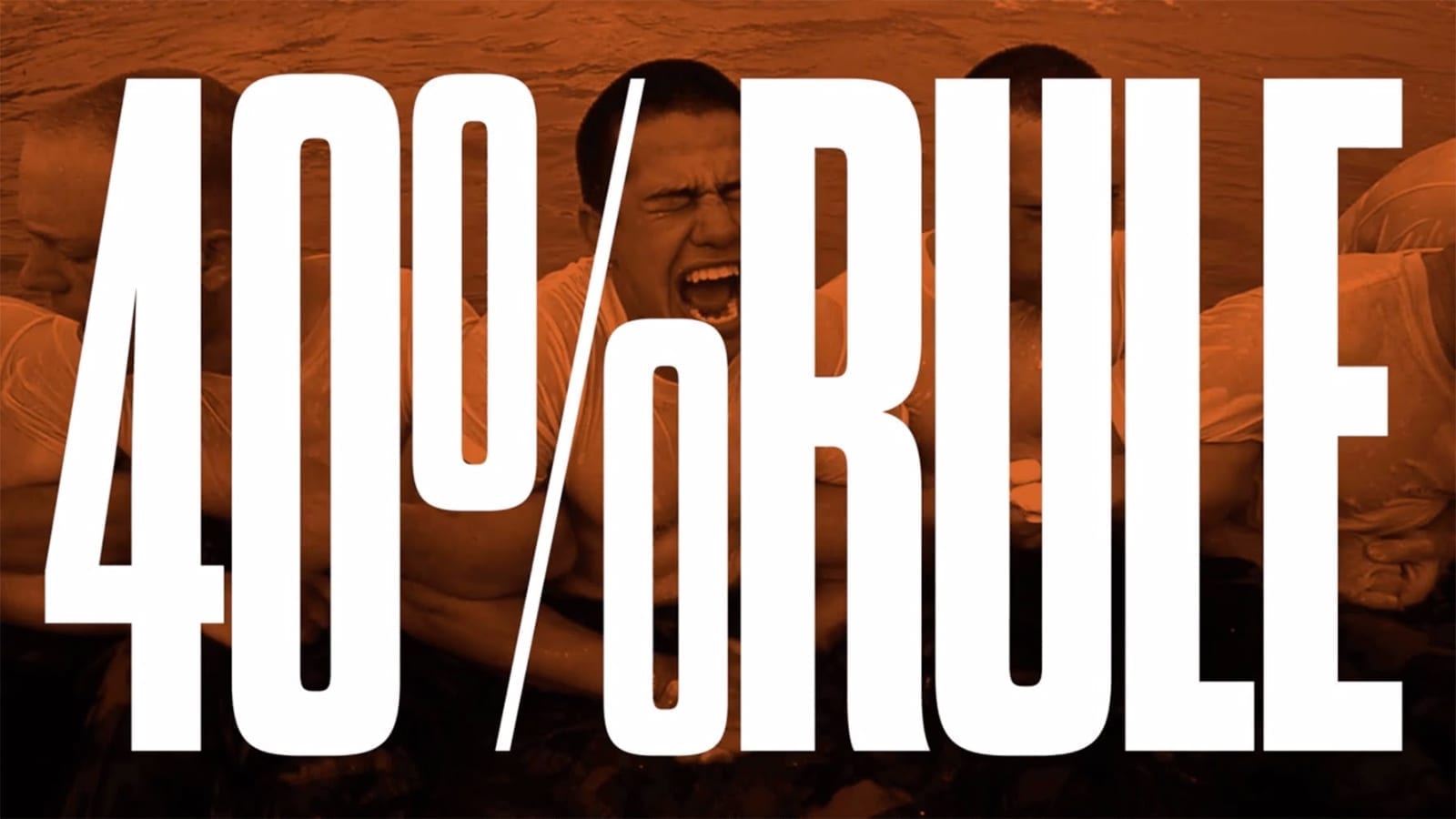 If we somehow managed to poll every post-pubescent human being on Earth, you can bet the family heirloom every last one of them would say they’ve experienced a breaking point. Whether during an intense training camp, rocky business venture or even a tumultuous personal relationship, we’ve all in one way or another felt what it’s like to be at the end of our ropes.

Think of the star athletes and industry leaders who have become household names. Like everyone else, they had to brave many trials and tribulations before reaching their summits of success. For instance, Conor McGregor worked as a plumber’s apprentice before leaving the trade to pursue a career in MMA. In fact, he picked up a welfare check just days before his UFC debut in 2013. The rest, of course, is history.

What’s so dramatic about a breaking point is that it often causes us to choose the easy way out—to follow whatever path provides the quickest escape from the pain. However, a simple but powerful mental toughness trick from the U.S. Navy SEALs might give you the edge you need to stay the course.

Dubbed “The 40% Rule,” the SEALs believe when your brain tries to tell your body you’re done, you’re really only about 40% done. This might help answer why so many marathon runners hit a wall at mile 16 but are somehow able to survive another 10.2 miles to the finish.

On Big Think, ultra-marathoner and Marquis Jet founder Jesse Itzler reminisced about a time he ran a 100-mile race next to David Goggins, a 200-pound SEAL. While Itzler ran the race as part of a six-man relay team, Goggins ran alone. At about mile 70, with kidney damage and two feet full of broken bones, Goggins pressed on and finished the race. Unsurprising from an eccentric billionaire, Itzler was so taken aback by the SEAL’s performance that he invited him to come live with his family for a month to educate them on mental toughness. Itzler recalled one of his first lessons on the 40% rule:

“The first day that [Goggins] came to live with me he asked me to do — he said how many pull-ups can you do?

I did about eight.

And he said all right. Take 30 seconds and do it again. So 30 seconds later I got up on the bar and I did six, struggling. And he said all right, one more time. We waited 30 seconds and I barely got three or four and I was done. I mean couldn’t move my arms done. And he said all right. We’re not leaving here until you do 100 more. And I thought there’s no — well we’re going to be here for quite a long time because there’s no way that I could do 100. But I ended up doing it one at a time and he showed me, proved to me right there that there was so much more, we’re all capable of so much more than we think we are. And it was just a great lesson.”

Anecdotes are great, but let’s talk “proof.” In one 2008 study published in the European Journal of Neuroscience, test participants were given a placebo but told it was caffeine. These same folks were able to lift significantly more weight than those who were actually given caffeine.

In tandem with Itzler’s story and countless other examples, these findings tell us we need to seriously rethink what our minds and bodies are capable of. So the next time you think you’re maxed out and can’t go any further, just remember:

To reach out to the author, send him an e-mail at [email protected]