WBC to make (another) title belt for Canelo Alvarez vs. Billy Joe Saunders

The WBC will be creating the Mestizo title belt for the upcoming battle between Canelo Alvarez and Billy Joe Saunders. 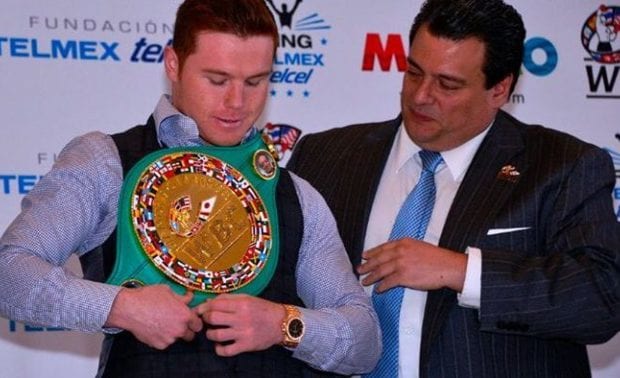 The World Boxing Council are set to create another title belt, which Canelo Alvarez and Billy Joe Saunders will compete for on May 8.

Alvarez and Saunders already hold titles at super middleweight, with the battle in Texas qualifying as a unification bout. Despite that, WBC President Mauricio Sulaiman has revealed the sanctioning body will introduce the ‘Mestizo belt’ to offer an extra motivation for the two fighters involved.

“During this fight, it’s going to be where the World Boxing Council will give the world another piece of art, the beautiful Mestizo belt, made by the State of Mexico. As you may know, the WBC commemorates the two great Mexican dates [Cinco De Mayo in May and Mexican Independence Day in September], as the most important fights of the year are held on these dates and magnificent pieces from various cultures have been created [for these fights].

“First it was the Huichol, then Chiapas, then the Mayan culture , and last year it was dedicated to the State of Mexico with the Mazahua and Otomi belts. As there were no fights in 2020 due to the pandemic, we agreed to dignify this entity in 2021, and very soon we will present the Mestizo (title).”