Check out what the pros had to say about the trilogy fight between Tyson Fury and Deontay Wilder. 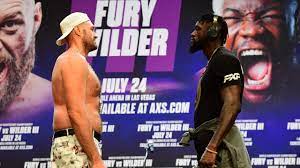 Tonight in Las Vegas, Tyson Fury and Deontay Wilder met in the ring for the third time.

In the end, it was Fury who emerged victorious, sending Wilder to the canvas unconscious after surviving two knockdowns himself in the fourth.

As is the case with big heavyweight nights, there were plenty in attendance and watching at home. Check out what the pros had to say below:

Wilder-Fury, ‘Can an old dog learn new tricks’, maybe, maybe not, but he can still bite. 🐕 🦷🥊 #FuryVsWilder3 #FuryWilder3

Deontay has been saying a legacy dies when the fighter dies. I don't believe this. It's incorrect.

TYSON FURY WITH A BIG KNOCK DOWN ON WILDER #FuryWilder3 pic.twitter.com/QICQiMBdZj

Deontay Wilder puts Fury down on the canvas TWICE.

Both were hurt by shots to the temple not jaw. Bulk of Wilder is burning his tank. #FuryWilder3

Deontay Wilder seems to be stumbling heading into the late rounds.

The Gypsy King!!!!!!!!! @Tyson_Fury is a beast and boy @BronzeBomber has nothing to be ashamed of. This shit was crazy! I am so happy I watched this fight. Bravo fellas

Got to be respect between the 2 now. PLEASE!
An amazing trilogy!

The overall better technique of Fury showed all night, and his ability to fight on inside was a difference. #FuryWilder3 #FuryWilderIII