The combined purse for this weekend’s fight is the fourth largest in boxing history – although ‘AJ’ is getting the lion’s share. 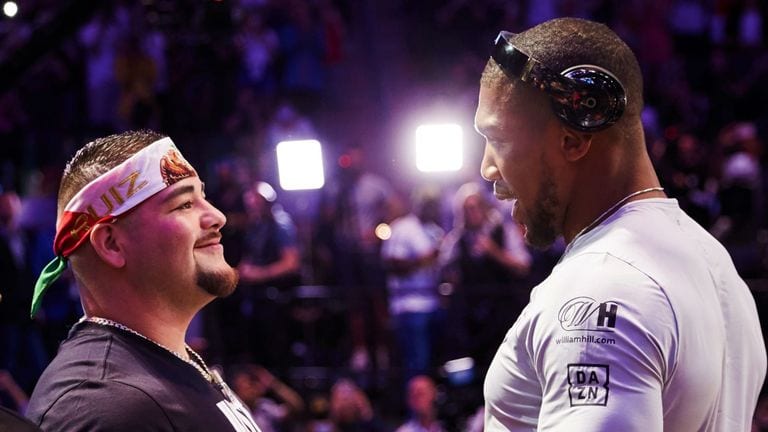 Anthony Joshua’s pursuit of the world titles he lost on June 1 to Andy Ruiz in one of the biggest shocks that the heavyweight division has seen in many a year will prove to be a financially lucrative one.

The British Olympic gold winner was sensationally defeated by unfancied Ruiz in the seventh round of their contest during the summer in a fight in which he was dropped to the canvas no less than four times, but despite coming into their rematch as the challenger Joshua will be paid handsomely.

Per the Daily Mail, ‘AJ’ is set to earn in excess of $85 million for his efforts on the night. Ruiz, meanwhile, has been cast in the role of ‘B-Side’ despite holding three of the four recognised world titles and is reported to be earning around $10 million, significantly less than that of the challenger.

However, despite Ruiz’s paltry pay (by comparison, that is) the two figures will combine to make it the fourth biggest fight purse in history behind, among others, Conor McGregor’s August 2017 boxing match with Floyd Mayweather.

Ruiz’s purse represents a raise of $3 million from the $7 million sum he received for his first fight with Joshua — but falls far below the $50 million figure he was reported to be lobbying for while the fight was being discussed.

The fight will take place this Saturday night, December 7, Saudi Arabia at the UNESCO World Heritage Site of Al-Turaif in an arena custom-built to house this monstrous sequel to one of the most exciting heavyweight scraps in recent years.