WWE’s Daniel Bryan on Mike Jackson: “If I could survive a six month camp, I think I could beat him”
Press enter to begin your search
Sports

WWE’s Daniel Bryan on Mike Jackson: “If I could survive a six month camp, I think I could beat him”

WWE star Daniel Bryan still fancies his chances against Mike Jackson if they were ever to meet in the cage. 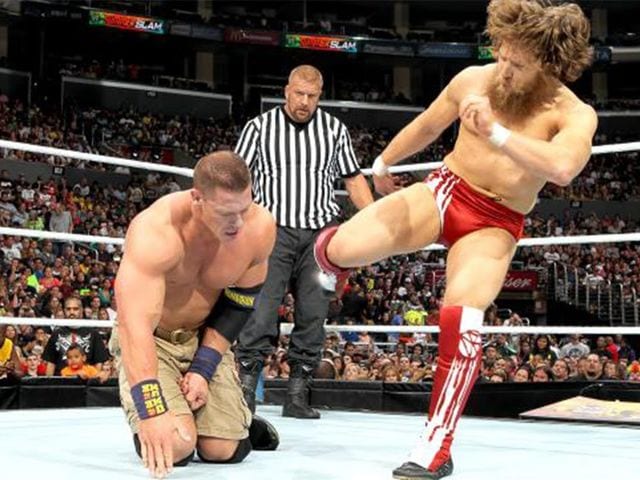 It might get eyes rolling amongst the MMA fandom, but a professional wrestling star not named CM Punk or Brock Lesnar still wouldn’t mind stepping out of the ring and into a cage. This time, it’s WWE star Daniel Bryan who could see himself having a scrap if the opportunity came up.

According to Bryan, he fancies himself to beat CM Punk’s former opponent Mike Jackson if they ever fought under mixed martial arts rules — an opinion he voiced not long after Jackson’s win over Punk at UFC 225.

Apparently, a couple of months later, he still feels the same, even if he’s aware he could be completely wrong.

“[I could submit him], but that could be false confidence,” Bryan said, speaking on Heated Conversations with Booker T (H/T WrestlingInc). “I’m very open to that. I think most people who know me know this. If I were to say like, ‘Yeah, I think I could beat Mike Jackson’, it’s that. It’s not me being like, ‘Oh, I would kill that man. I would go out there and destroy that man’.

“It’s no disrespect to him, it’s no disrespect to CM Punk. It was the first time I ever actually watched a UFC show where somebody won a fight, and I thought, ‘You know what? I think I could beat that guy’. And just say that, ‘Oh, I’ve toyed around with jiu-jitsu’ or whatever it is, and I’ve been training grappling and stuff for a lot of years. I’ve been training kickboxing and stuff for a lot of years.”

Having said all that, Bryan is aware there is a mental aspect to fighting that he might not own.

“So, my thinking is, if I could survive a six month camp, I think I could beat him. But that said, he also has a lot of experience, he’s gone out there and done… like, I’ve never gone out there and done any real combat fighting. I’ve done a lot of sparring with a lot of high level people, but that’s not the same thing as a fight. And I think one of the things a lot of people will say about me, and I will say about myself… for example, I hated games in high school football. I loved practice, right? Because then I’m just hitting my buddies. I loved practicing, and if I hit somebody, I could talk crap to them next day in school. You get me out there in a game, I don’t care about hitting these people. I don’t know them! It’s a stupid game, and that’s kind of my attitude in sports in general.

“You see these UFC fighters, and you see their attitudes when they get into the cage, and they’re ready to fight. I’ve had that a couple of times in my life when it’s been a real fight, a personal confrontation, but as a sport, I don’t know if my mind would ever switch like that.”