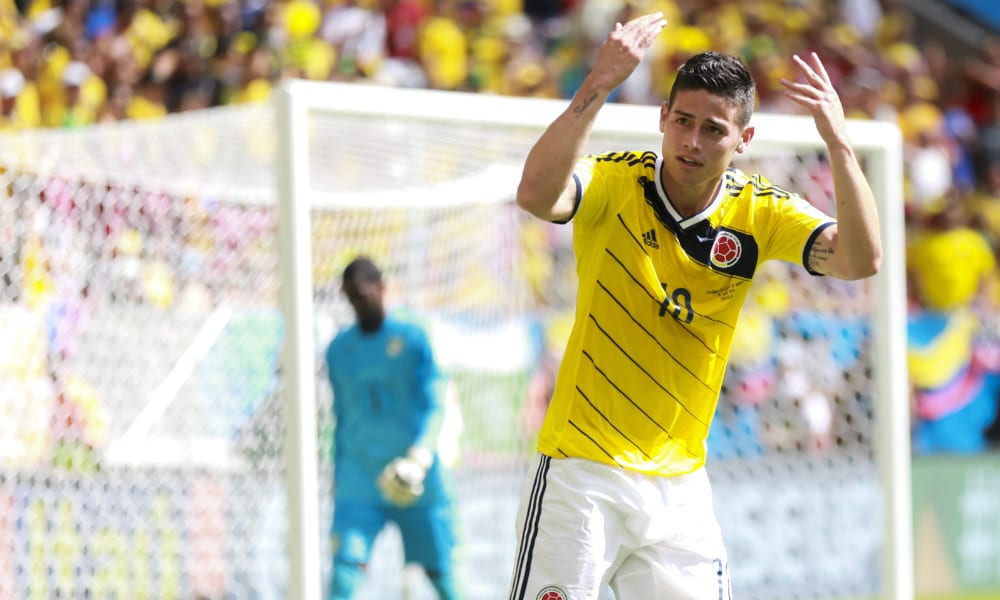 Colombia’s superstar players stepped up to the plate and helped fire their side back into contention in Group H.

The world-class quartet of James Rodriguez, Radamel Falcao, Juan Quintero and Juan Cuadraro all produced moments of quality as Colombia defeated Poland 2-0 to put their Group H progression back in their own hands.

Both sides knew their clash was effectively a knockout game, with neither nation gaining a point from their opening group games.

And the pressure seemed to weigh more heavily on the shoulders of the Polish players, who struggled to build any concerted pressure. Colombia, by contrast, looked relaxed, determined and ready for the task at hand – and they dominated much of the opening half.

The South Americans huffed and puffed, but struggled to force Polish keeper Wojciech Szczesny into action for much of the half.

But then, six minutes before the break, Colombia’s star playmakers combined to set up the opening goal of the night via the forehead of centre-half Yerry Mina.

Cuadrado won a corner and played it short to Juan Quintero. The midfielder then fed a short pass to James Rodriguez, who stood up a teasing cross that simply begged to be headed home, and that’s exactly what happened, as Mina rose highest to put Colombia a goal up heading into the halftime break.

Knowing their World Cup hopes were in the balance, Poland pushed forward in search of an equaliser, but were punished on the counter-attack by a superb Radamel Falcao goal.

Quintero took possession in the middle of the Polish half and slipped a perfectly-weighted pass through the Polish defence for Falcao, who finished superbly with the outside of his right foot, leaving Szczesny with no chance.

El Tigre! What a time for Falcao to score his first ever World Cup goal. #POL #COL pic.twitter.com/Obi2Eix4mK

And Colombia finished with a flourish as Cuadrado netted their third. Rodriguez took on two Polish players wide on the left and swerved an inch-perfect cross-field pass into the path of the Juventus winger, who raced through the middle and fired past Szczesny to spark joyous scenes among the 30,000 Colombian fans who packed the stands in Kazan.

What. A. Pass. Cuadrado scores and Colombia have their third! #POL #COL pic.twitter.com/ScEGve2b7m

Colombia’s win means their World Cup hopes are back in their own hands as they head into the final round of group matches, while Poland’s dreams of progression are now sadly over.

Colombia face Senegal knowing that victory will fire them into the knockout stages, but with Senegal’s own progression also dependent on their performance in that game, expect the tension levels to be through the roof when they meet in Samara on Thursday.