In New York, things take a turn for the intense
Press enter to begin your search
Sports

In New York, things take a turn for the intense

Things didn’t seem the same in the Big Apple 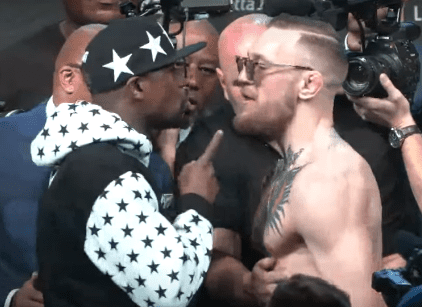 After the boisterous performance in Toronto, Conor McGregor and Floyd Mayweather brought a different feel to Brooklyn.

While the insults flew in Canada yesterday, they did so with a certain element of performance and jovial showmanship. In the Big Apple, that feeling of any niceties appeared to have faded, with the two men rarely engaging the other as they had done previously.

Combine that with a shocking audio set up, and a crowd already jaded by a long wait, and the entire affair felt far closer to the edge than it had done prior. Indeed at one point, things bordered on the physical, with Mayweather literally calling on his hired entourage to swarm McGregor, starting a shoving match which included Dillon Danis and Owen Roddy.

Realistically, the third act in the duo’s four part tour has started to reveal the limitations of the boxing press conference model. With Showtime repeatedly failing to learn that no modern fan wants to hear from anybody other than the two fighters, and forcing viewers to endure dull speeches repeating the same self-congratulatory announcements has only become more irritating. Along with that, by not having media to drive the conversation through the asking of questions, McGregor and Mayweather are expected to interact, but also at the same time sort of not.

With London long been predicted to be the event with the most raucous crowd, it feels as if a lot is riding on tomorrow night to finish the promotional tour with a bang — but if the tone remains as it did tonight, that bang could be something more physical than verbal.