Tipperary’s Fleury improved to 5-1 as a professional with a second round rear-naked choke victory against Shaun Taylor in front of a raucous Dublin crowd. 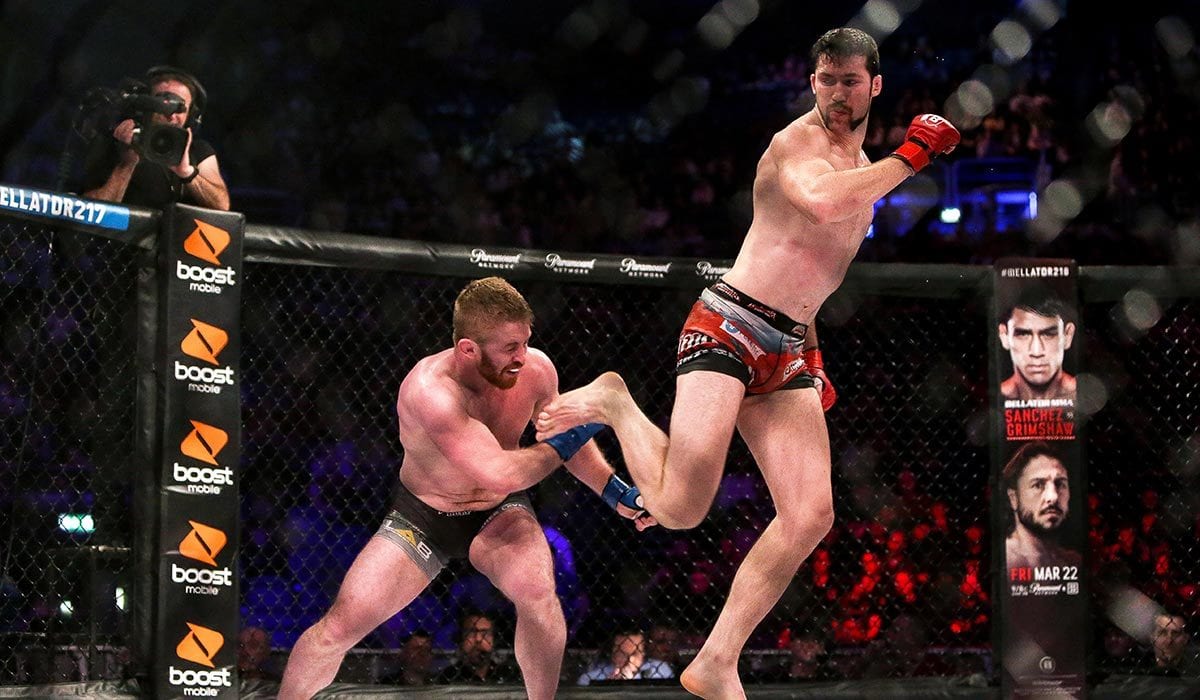 When Conor McGregor took the microphone from Dan Hardy inside Dublin’s 3 Arena following his first round finish of Diego Brandao nearly five years ago, he announced that Irish athletes were in the midst of a ‘takeover’ of mixed martial arts.

A couple of weeks back, inside that same venue in Ireland’s capital city, that particular prophecy was further fulfilled at Bellator 217. A host of Irish athletes fought and won on a card which was televised live by Sky Sports, the type of exposure to audiences in Ireland and the United Kingdom which can only provide a fillip to the sport as a whole, let alone the athletes who spill blood & sweat inside Bellator’s circular cage.

One of those was Will Fleury (5-1). While his fight didn’t make the televised portion of the card (that will come in time, don’t fret), a second round rear-naked choke win against Shaun Taylor served further evidence that the SBG man stands on the forefront of this next wave of Irish mixed martial artists.

“I still haven’t been able to watch the fight back which is something that’s really frustrated me,” Fleury (pictured above, right) said of the fight to The Mac Life. “I implemented most of what I wanted to. I felt If I’d have timed my knees when he went for the takedown slightly better I could have finished him with that. But overall I’m pretty happy with my attitude and my performance. There’s always plenty of room for improvement though and I’m sure I’ll see a tonne of things I want to work on once I can watch the fight.”

Fleury’s opponent, Scotland’s Taylor, was 8-1 before stepping into the cage on the banks of the River Liffey but his participation in the event was marred somewhat when he missed the middleweight limit by four pounds — the type of egregious error which suggests to some that he didn’t take his pre-fight obligations as seriously as he may have.

“I got a call from Jude (Samuel, head of Bellator’s fighter relations in Europe) as I was walking to the official weigh in, so I knew something was up. To be honest I was kinda relieved it was just missing weight because it meant the fight could still happen. I was always going to take it.”

Fleury was awarded a percentage of his opponent’s fight purse as a result, the punitive measure often used in situations such as this but the Irishman suggests that the financial penalties should be more directly related to the manner in which a fighter misses weight.

Once he got into the cage, however, those concerns melted away. Roared on by the sold-out crowd Fleury sealed victory 90 seconds into the second round, prompting the sort of eardrum-ruining outpouring of emotion from the audience which has been associated with Irish fans in recent years. But how does that feel in the cage itself?

“It’s hard to describe but it’s a very primal, spine-tingling feeling,” he recalls. “When I walked out and raised the Tipp flag with the tricolor and screamed to the crowd I got a huge response it gave me a massive adrenaline rush, I was shocked how much energy the crowds energy gave me.

“I’ve technically fought of a bigger crowd in South Africa but was special, in comparison it meant so much more to me. I’ve been booked to fight in the 3 Arena three times before this and I’ve dreamed of fighting there for quite a few years before that. It was worth the wait! I can’t thank everyone who came and was part of that atmosphere enough it was genuinely incredible.”

This is a video of me breaking my gleniod on November 12th last year. I was told by several specialists that I’d need surgery and at least 6/9 months of rehab before I could even start a camp. We had already been given the date for last Saturday’s card at this point and I knew watching on from the sidelines having not redeemed my first loss would have been very painful. I did all the research I could and convinced myself I could heal fully before February 23rd. When I got offered an 8-1 opponent mid December I still couldn’t throw a punch but I had relentless faith in the processes laid out by the Physio’s I was working with and had no issue accepting the biggest challenge of my career. I’m delighted to say I write this with a shoulder that’s stronger and more flexible than its ever been before. Shit happens. Sometimes you can overcome it sometimes not but ultimately if you have faith in your effort and your mindset in the long term nobody can stop you other than you. @stuartjackson_sbg, @nextstage.injurytherapy, Colm Fuller @sscsantry and Dan Healy I can’t thank you enough for your help #belief #comeback #relentless #driven #trustyourgut

What is even more remarkable about Fleury’s victory was that it came just weeks after he suffered a particularly serious shoulder injury in training at the SBG Ireland facility in December. Short of having to get his limb amputated, Fleury says there is no chance he would have missed the opportunity to fight on the biggest stage so far in his young career.

“When I got the results of the scan It was a very difficult period,” he admits. “I’d just lost for the first time in my last fight, I was desperate to get back and prove I’m still Will ‘Fucking’ Fleury. The initial prognosis was six t0 nine months out, at best. I knew I was fighting an uphill battle which really helped strengthen my mind. I followed my own intuition but I feel extremely grateful for the advice of my physios Adam Galligan, Stuart Jackson and Colm Fuller. I worked my balls off but I was lucky that this was adversity I could battle through.”

Bellator have already announced a return to Dublin in September (specific date TBC) for which Fleury will be pushing for a spot on the televised, main card. Six months is a long time, though.

“I’m bulling to get back in the cage,” he says. “I have serious momentum after that performance and I don’t want to let that die down. I’d love to get on one of the Bellator cards in England which will either be Birmingham on May 4th or London on June 22nd. I lived in London for a while so I’d get a good buzz off of going back to fight there.”

As for potential opponents, a few names were mentioned. Rapper 50 Cent has become something of a meme in MMA circles lately as he has flirted with the idea of embarking on an MMA experiment but that isn’t entirely a realistic booking (Fleury says he would win in ‘about the length of time it takes to land a straight right, left hook’) but perhaps a more intriguing pairing would be with Joe Schilling, the world class kickboxer who has put together a 2-2 record under the Bellator banner.

“I listened to [Schilling] on Joe Rogans podcast a few years back and I liked the “can’t stop crazy thing”. I’ve been following his career since and I was impressed with his last performance. Even though his record isn’t the best, he’s fought legit guys. He’s an American crazy bastard and I’m an Irish raw bastard. Who wouldn’t want to see that fight?”

Long term, Fleury’s aspirations are simple: to become the best in the world.

“I want to prove I’m the best middleweight in the world. So I’ll fight whoever I have to to prove that. I don’t know the number of fights I’ll have to win, that’s up to Bellator. I will be a Bellator middleweight champion it’s just a matter of how long it will take.”