‘Relentless’ Charlie Ward is now 3-0 under the Bellator banner. 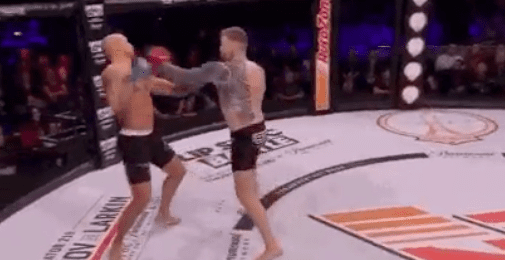 Charlie Ward most certainly does not get paid by the hour.

The SBG Ireland man earned the sixth win of his professional career in Dublin on Saturday night, uncorking a massive left hook to defeat Jamie Stephenson early in the first round. Ward looked in phenomenal shape in his third straight stoppage win under the Bellator banner since returning to middleweight after a two-fight jaunt at welterweight. It took just 34 seconds to get the job done.

👊🍀Woah! @RelentlessWard with another big KO just 0:44 into round one!

After the fight Ward proclaimed his frustration to John McCarthy about not being a selected to be a part of the main card. Judging by his deeds inside Bellator’s cage in his home country, that is a mistake that won’t soon be repeated.

Asked for final words by McCarthy, Ward kept it simple. ‘Keep an eye on me,’ he said, before walking from the cage.