‘The Showstopper’ is among a slew of Irish fighters confirmed for Bellator’s September event in Dublin. 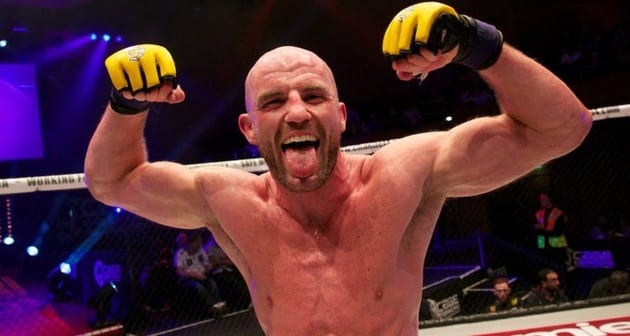 ‘The Showstopper’ is back.

After being denied the opportunity to compete at the recent Bellator London card due to injury, Ireland’s Peter Queally will next set foot in the cage in front of what will be a wildly partisan crowd inside Dublin’s 3 Arena to face England’s Ryan Scope, a 10-2 lightweight who fights out of the Sunderland Fight Pit.

News of the bout was first reported by MMA Fighting.

Queally will enter the bout after losing a razor-thin split decision to Myles Price in the same venue in February. Prior to that bout, the SBG Ireland man earned arguably the biggest victory of his career when he knocked out the then 24-3 David Khachatryan at a Fight Nights Global Event in Rostov-on-Don, Russia.

Remember this day brother?! Haha!! Going like two cement mixers with 10 years! And we are still going!! They’ll never get us! @thenotoriousmma

Scope, meanwhile, fights for the first time since losing his Bellator debut to the experienced Patricky Freire in Bellator’s event in Newcastle on the card’s main event, also in February. His only other career defeat came via rear-naked choke to Lewis Long two years ago in February.

Bellator also confirmed that SBG’s Frans Mlamo will face Dominique Wooding on the Dublin card in what should be a wildly entertaining fight, while Richie Smullen returns against Sean Tobin while two former Cage Warriors world champions, Karl Moore and Lee Chadwick, will square off at the event.

The announced bouts for the Bellator Dublin card on September 27th are: