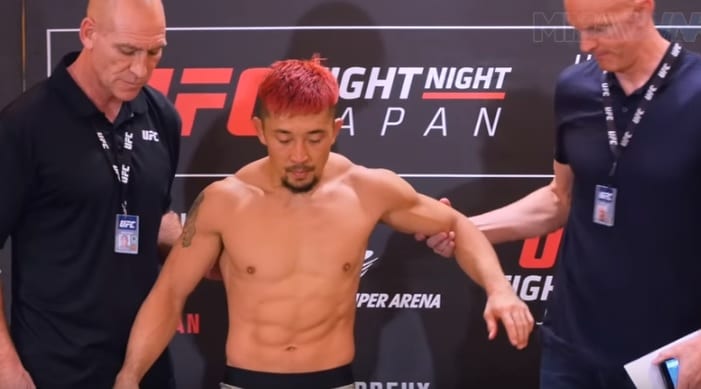 The UFC has cancelled the featherweight bout between Japanese MMA veteran Mizuto Hirota and Charles Rosa scheduled for Friday’s card at the Saitama Super Arena in Saitama, Japan.

Hirota looked drawn out at Thursday’s official weigh-ins and, at one point, appeared to almost lose his footing as he stepped off the scales where he was held up by UFC staff. He weighed in at 150-pounds, some four pounds over the featherweight limit for a non-title bout.

In a move to protect fighter safety, the UFC swiftly announced that Hirota’s bout with Rosa has been removed from the card.

A statement on UFC.com reads: “Due to health and safety concerns, the UFC featherweight bout Hirota vs. Rosa at UFC Fight Night Japan: Saint Preux vs. Okami has been cancelled, as Hirota was deemed unfit to compete by the UFC medical team.

UFC Fight Night Japan: Saint Preux vs. Okami will proceed as scheduled with 10 bouts at the Saitama Super Arena in Saitama, Japan. Moving to the main card will be the flyweight bout between Jussier Formiga and Ulka Sasaki.”

You can view footage of Hirota’s weigh-in via MMAJunkie below: