Mirko CroCop calls for one last fight with Fedor Emelianenko

Mirko CroCop wants one more fight — and it against a familiar face.

Despite having announced his retirement in January this year, the Croatian had hinted that he may be interested in a ‘farewell’ bout later in 2017, providing he managed to recover from a large number of nagging injuries.

It seems as if that time has come, as the mixed martial arts legend took to his Facebook in a post to call out his old rival Fedor Emelianenko. 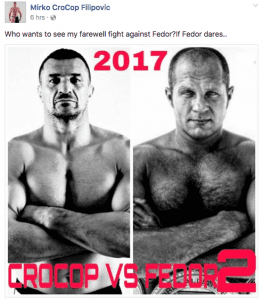 The two have of course met before, having one of the most iconic heavyweight fights in mixed martial arts back in August of 2005 in PRIDE, with Emelianenko coming out on top on that occasion.

Should CroCop return for the Fedor fight, it would be one of the few contests that could make sense. Whether the Russian, who currently has a deal with Bellator MMA and is set to fight Matt Mitrione at Bellator 180, accepts the fight is yet to be determined.