Which were the best live events of the year? Here’s our list. 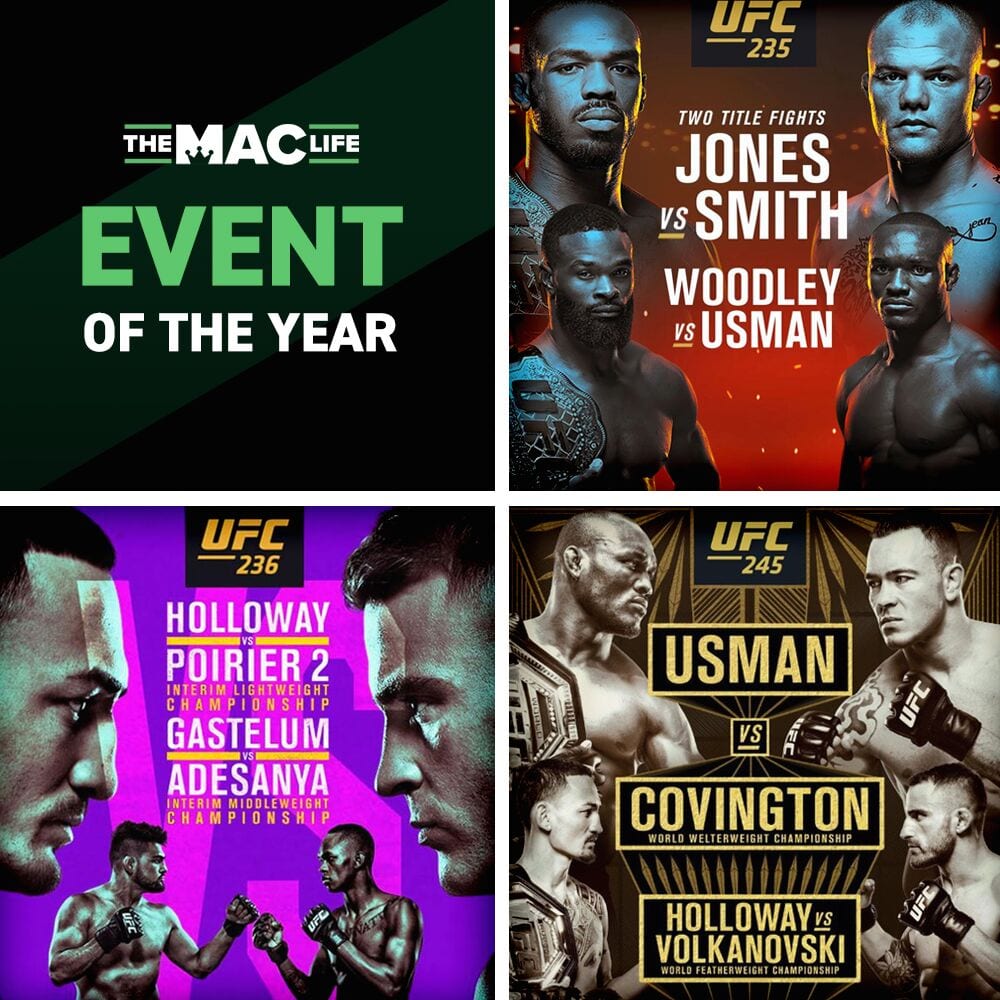 It has been another bumper year in the annals of mixed martial arts history and among the dozens of events we have covered in 2019 here at The Mac Life, we have collectively selected our favourite three events to have taken place in this calendar year.

A matchup to determine the interim UFC lightweight champion, and a future date with Khabib Nurmagomedov, was on the line when then-featherweight champion Max Holloway stepped up in weight to take on the surging Dustin Poirier in a rematch of a fight which had taken place several years prior, and when both men were still developing into the fighters they would become.

In the end it was Poirier who collected a second win against the Hawaiian by a unanimous score of 49-46 after five rounds in what was one of the finest performances of his career.

The co-main event, though, will be the fight for which this card is truly remember. Our 2019 Breakthrough Fighter of the Year, Israel Adesanya, was handed the sternest test of his career in Kelvin Gastelum and through five past-paced rounds both men showed why they are considered to be among the elite at 185-pounds. Despite being hurt late in the fight, Adesanya’s pinpoint striking was enough to establish a lead on the scorecards in arguably the year’s best fight.

The latest entrance on the list, UFC 245 was headlined by the year’s most intense grudge match between welterweight champion Kamaru Usman and the brash, loudmouthed Colby Covington. Sometimes when two fighters with a genuine dislike for each other meet, the fight can translate into a plodding affair where both fighters are wary of making a mistake and allowing their opponent an entry point into the fight.

Not so here. The division’s two best wrestlers engaged in a near 25-minute kickboxing contest without even a single takedown attempted throughout the contest. The finish, when it came, was the type of definitive conclusion the fight deserved, as Usman finally win by strikes with less than a minute remaining in the final frame. It was drama very much befitting the magnitude of the fight.

The co-main event saw Australia’s outstanding Alexander Volkanovski prize the UFC featherweight championship from Max Holloway in a close but definitive fight, while Amanda Nunes also underscored her status as the best female fighter on the planet by winning a decision against former champion 145 pound Germaine de Randamie to defend the UFC bantamweight title.

The UFC’s March card in the T-Mobile Arena in Las Vegas was the first bumper event of the year. Two title fights topped the card, but the strength in depth continued into the undercard as several rising stars enhanced their reputations, rising through the rankings in the process.

The firs title fight saw the greatest light heavyweight in history, Jon Jones, easily outpoint Anthony Smith across five rounds in defence of his world title, while Kamaru Usman breezed past Tyron Woodley in the co-main to claim the UFC’s welterweight strap. Ben Askren, who had recently joined the UFC in a ‘trade’ deal with ONE Championship, bypassed a rough start to submit Robbie Lawler in an outstanding fight which lasted just over three minutes while Weili Zhang showed the type of form which would make her a world champ later in the year by beating Tecia Torres by decision. The final fight on the main card saw Pedro Munhoz knock out Cody Garbrandt to hand the former 135-pound champion his third successive KO defeat.

The undercard, as mentioned, also featured some future stars in the shape of Zabit Magomedsharipov, who beat Jeremy Stephens, while Johnny Walker scored a sensation flying knee KO of Misha Cirkunov just over 30 seconds into their fight.