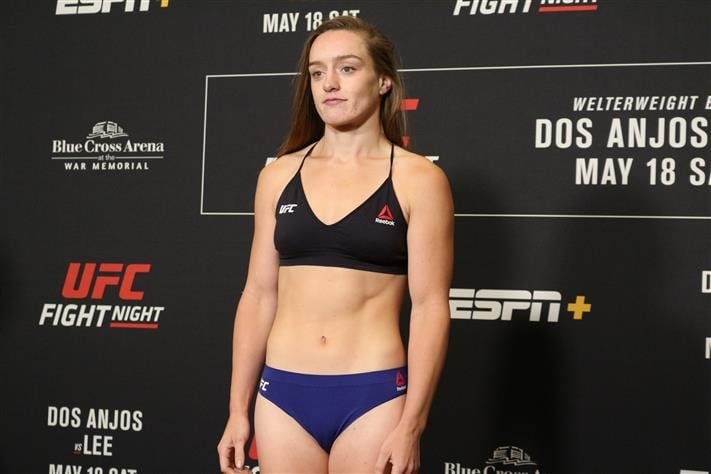 Aspen Ladd, a fighter previously considered a strong contender to win UFC gold, has been cut loose from the organisation after missing weight for a third time in her UFC career — the latest of which forced the cancellation of a recent scheduled bout with Sara McMann.

Ladd, 27, has been defeated in her last two fights in the UFC, dropping unanimous decisions to both Norma Dumont and Raquel Pennington; fights which took place at featherweight and bantamweight respectively. Her weight woes have clearly drawn the attention of the UFC brass, with Dana White stating that the issue would be addressed following the crumbling of the McMann fight, for which Ladd weighed two-pounds over the limit.

It was the third time that Ladd has forced the cancellation of a fight due to troubles on the scales. She lost the first fight of her career to Dutch striker Germaine de Randamie in 2019 after appearing visibly uncomfortable on the scales following her weight cut, and was knocked out just 16 seconds into the fight. However, she said afterwards that her weight cut had no impact on the result of the fight.

Her license to compete at bantamweight was subsequently suspended by the California State Athletic Commission who determined that she was unable to compete at the 135-pound class. She was also pulled from a 2021 bout with Macy Chiasson.

Ladd’s UFC run ends (for now, at least) at 4-3. She entered the organisation on the back of an 8-0 record, and after also amassing an 8-1 amateur record.