In Los Angeles, a few opening jabs thrown, but no heavy blows landed yet
Press enter to begin your search
Sports

In Los Angeles, a few opening jabs thrown, but no heavy blows landed yet

Who came away best in L.A.? 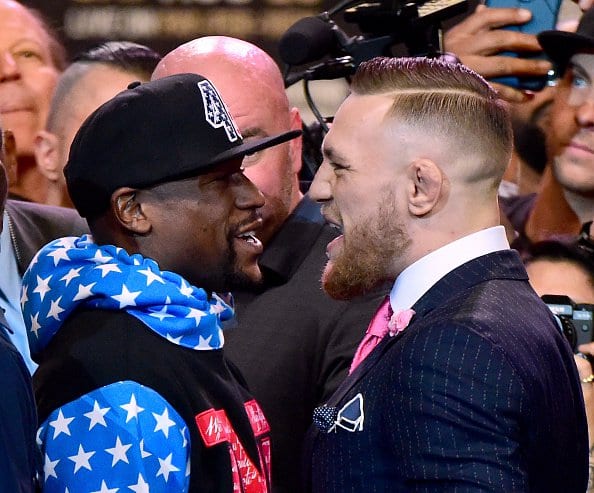 Throughout the build-up thus far for the Floyd Mayweather versus Conor McGregor fight, some have tried to steer the talk away from mixed martial arts against boxing.

At the press conference in Los Angeles, step one in the multi-city tour that the Irishman and the boxer are currently on, that conversation was forced back into the light, as the event became something of new school meeting old school.

Any MMA fans who tuned in could be forgiven for being slightly confused by the format of the affair, with multiple speeches being recited and the two fighters in question having minimal direct interaction. Any boxing fan unaccustomed to their younger combat sporting cousin probably found themselves bemused by the walking hurricane of disrespect hurling insults at one of their greatest ever athletes.

But — what about the men themselves?

For McGregor, it was the usual. Relaxed and composed, the UFC champion never looked uncomfortable, even when left on stage for a prolonged period waiting for his opponent and being made to give a speech that he was not expecting to give. The usual barbs, with Mayweather’s current tax situation being a highlight, were thrown and while McGregor giggled and laughed his way through the evening, the boxer sat behind him appearing to fume.

When Mayweather did get up to speak, he was hit with a chorus of boots from the LA crowd, and he would end many of his lines with a strut across the stage. It’s an act that made him the most successful man in his own support, but there was something about the dynamic of the two that made McGregor seem the fresher component.

Moves like Mayweather waving a cheques in McGregor’s face seemed to fall flatter than usual, with the Irishman’s suit with “fuck you” lining grabbing more attention. Long pauses provided less drama and increased frustration as fans just wanted to see the two interact.

But how will they feel today?

Well, by having limited dialogue with McGregor, Mayweather managed to escape going one-on-one in a Battle of wits with the Irishman, and in doing so likely saved himself being made a figure of ridicule. Combine that with the fact that Showtime cut off McGregor’s microphone, and you get the sense that Mayweather’s team could be walking away breathing a sigh of relief.

Or perhaps, Mayweather will believe that he had the last word, and point to the fact that he made McGregor wait as a sign that his old dominance and ability to control the rules is still firmly in place — and all the while McGregor just amuses himself

The narrative is still only forming, of course. Part two and the next chapter is to be written this evening.