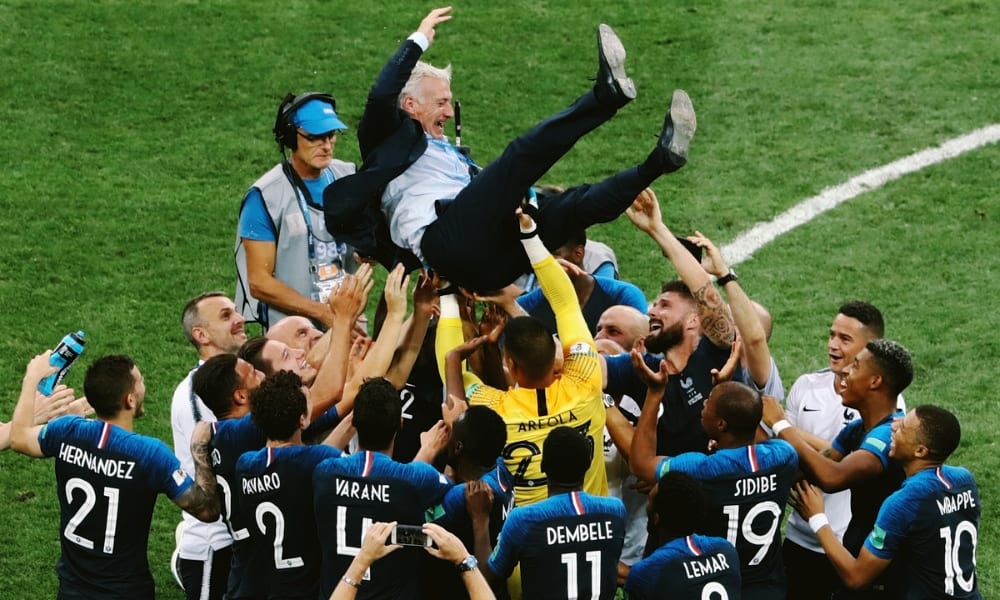 France were crowned World Cup 2018 winners after a thrilling incident-packed final that delivered great goals, exciting football and no little controversy in Moscow.

Croatia dominated much of the opening half, but went in at halftime 2-1 down after finding themselves on the wrong end of two controversial refereeing decisions by Argentinian official Nestor Pitana.

Croatia were well on top during the opening quarter of an hour, but a controversial award of a free-kick led to France taking the lead on 16 minutes.

Antoine Griezmann appeared to dive to the floor as he earned his side a free-kick, then his floated delivery into the box skidded off the top of Mario Mandzukic’s head and past Danijel Subasic in the Croatian goal.

It was an unfortunate own goal and painted a stark contrast from Mandzukic’s previous goalscoring contribution, when his extra-time finish sank England and sent Croatia through to the final.

The goal came completely against the run of play, and Croatia set about the task of levelling the scores as they continued their early pressure.

And they were rewarded for their attacking impetus with a stunning strike by Ivan Perisic, who switched brilliantly from his right foot to his left and smashed a low shot past Hugo Lloris to equalise on 28 minutes.

Parity lasted just 10 minutes when the Argentinian referee made another controversial decision to award France a penalty after goalscorer Perisic was adjudged – after a lengthy VAR review – to have handled in the box.

Griezmann stepped up and coolly slotted home the spot-kick before celebrating with a Fortnite-themed goal celebration.

Clearly irked by the outcome of the first half, Croatia came out on the attack after the break and Ante Rebic’s shot was well saved by Lloris in the opening moments of the second period.

Croatia’s relentless pressure continued to have France on the back foot, and manager Didier Deschamps, worried about influential midfielder Ngolo Kante’s ability to stay on the field for the full 90 minutes after being booked, withdrew the anchorman and replaced him with Steven Nzonzi.

Then, on 58 minutes, France struck again, as Paul Pogba collected his own blocked shot and fired brilliantly past the unsighted Subasic to put Les Bleus 3-1 ahead.

And France seemingly put the game beyond doubt when teenage superstar Kylian Mbappe fired in a superb fourth goal from outside the area to put the French in dreamland with 25 minutes to play.

Longer GIF. RT @JogaBonito_USA: THE TEENAGER DOES IT!!!! Kylian Mbappé scores a #Golazo and now #France have one hand on the trophy!!! Fantastic strike into the bottom corner by the 19 year old, what a moment for him!! 4-1.#FRACRO #LesBleus #FRA pic.twitter.com/ntmVZRdS08

Incredibly, just four minutes later, Croatia were handed a lifeline after one of the worst blunders ever seen in a World Cup Final.

French keeper Lloris received a routine backpass, hesitated, then tried to take the ball around the onrushing Mandzukic, who simply tackled the ball into the empty net to give Croatia a glimmer of hope at 4-2.

But despite Croatia’s best efforts, they were unable to grab a third goal that would have put France under late pressure, as Les Bleus comfortably saw out the final minutes of the game to capture their second World Cup, repeating the feat of the 1998 side that won the trophy on home soil.

Back then Didier Deschamps was the captain, and now, having also won it as a manager, he joined Franz Beckenbauer and Mario Zagallo as the only men to win the World Cup as both a player and a manager, and only the second to win it as a captain and a manager.