Deadline Day: All the key moves on the final day of the Premier League’s pre-season transfer window
Press enter to begin your search
Sports

Deadline Day: All the key moves on the final day of the Premier League’s pre-season transfer window 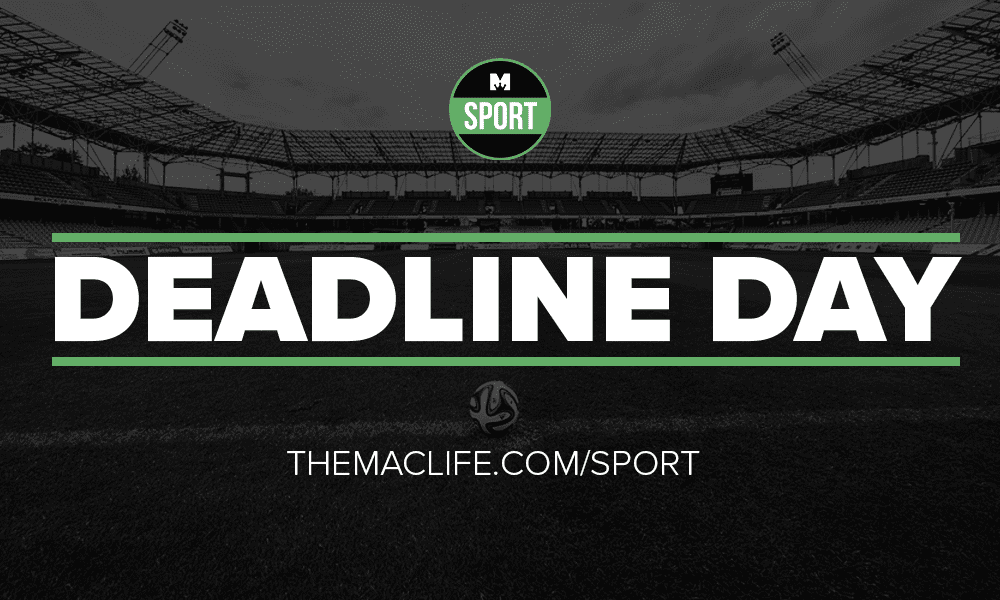 Follow our updates as the Premier League’s 20 clubs face a race against time to finalise their squads ahead of the 2018/19 EPL season as they look to secure their last-gasp signings on Deadline Day.

Fees are undisclosed if not stated

It was reported as being close to done a little while back, but we finally have confirmation of one of the biggest transfers of the day, as Marseille’s 22-year-old Cameroon international midfielder Andre-Frank Zambo Anguissa joins Fulham in a deal worth £22.3million.

Fulham CEO Tony Khan tweeted confirmation himself, saying the club had landed one of its main transfer targets.

It took a little while for everything to be signed, sealed and officially announced, but Everton have finally announced the signings of Barcelona duo Yerry Mina and Andre Gomes.

Mina arrives on a permanent deal for £27.1million, while Gomes joins on loan.

Mina told Everton TV: “It is important that the club want to fight for something. This is why I’m here.

“I have watched the Premier League for a long time. It is the best league in the world. This is a great opportunity for me and I am looking forward to competing here.”

Watford have squeezed a final signing into the club as they’ve drafted in West Ham’s talented Portuguese teenager Domingos Quina, who may well get more of a chance to shine at Vicarage Road than he did at the London Stadium.

Arter arrives at Cardiff on loan

Bournemouth’s highly-rated midfielder Harry Arter has signed for Cardiff on loan after the Premier League accepted a deal sheet to allow the clubs to complete the switch before an extended 7pm deadline.

The Vardy party continues at Leicester

Leicester have capped off a memorable Deadline Day with arguably their best signing of the day, as their hotshot striker Jamie Vardy has signed a four-year deal with the club.

Another piece of business on deadline day… 👀✍️ pic.twitter.com/DlQ1U8yjXQ

That’s what Southampton have done with regard to their late attempt to bring Liverpool striker Danny Ings to St Mary’s on loan.

Ings has been on the periphery of the first team at Anfield, and a loan switch to the Saints could be just the ticket for both him and for the South Coast club.

The Foxes have had quite a day, and they’ve capped off a superb day’s business with another defensive acquisition, as they sealed the signature of former Freiburg defender Caglar Soyuncu in a deal worth £19million.

#lcfc can confirm that an agreement has been reached with SC Freiburg for the transfer of defender Çağlar Söyüncü.

Fulham supremo happy with his man

Owner/Director of Football/GM/Sporting Director of Fulham Tony Khan has spoken of his pleasure at securing the signing of keeper Sergio Rico.

He just tweeted: “I’m excited to announce that @FulhamFC has signed Sergio Rico on loan from Sevilla. Sergio is a world class goalkeeper, and now he’s joining a very talented cast of goalkeepers under contract at FFC, making our squad as strong as possible for the @premierleague. Come on Fulham!”

I’m excited to announce that @FulhamFC has signed Sergio Rico on loan from Sevilla. Sergio is a world class goalkeeper, and now he’s joining a very talented cast of goalkeepers under contract at FFC, making our squad as strong as possible for the @premierleague. Come on Fulham! pic.twitter.com/fHWuLTq1FI

Fulham have been tipped by some pundits to surprise a few in the Premier League this season, and now they’ll take to the field with a new goalkeeper between the sticks.

Sevilla’s two-time Europa League-winning keeper Sergio Rico has put pen to paper on a contract with the Cottagers, and looks a near-cert to become their starting goalkeeper this season.

There’s no official word from Everton yet, but according to Barcelona, the Merseyside club has agreed deals for TWO of their stars – Yerry Mina and Andre Gomes.

They’ve left it late, but Deadline Day looks like being a sweet day for the Toffees.

❗ [LATEST NEWS] Agreement with @Everton for the transfer of Yerry Minahttps://t.co/YMyWm4thOR

❗ [LATEST NEWS] Agreement with @Everton for the loan of @aftgomes https://t.co/mMgvCLX6Ig

The question now is will anyone else join him? It’s been reported that Everton have agreed a £28.5million fee with Barcelona for Yerry Mina, but have they secured the signing before the 5pm deadline? We’re on tenterhooks…

And the late moves continue to come in. Huddersfield Town have made a late signing, securing the arrival of Belgian Under-21 international Isaac Mbenza on loan from Montpellier.

West Ham have snuck in a late one, just as the transfer window closed.

Colombian international enforcer Carlos Sanchez has arrived at The London Stadium to provide more steel to the Hammers’ midfield.

The 32-year-old arrives from Serie A club Fiorentina on a two-year deal.

Everton fans will be enjoying their weekends with Bernie as Brazilian midfielder Bernard arrives at Goodison Park on a four-year contract.

🇧🇷 | Bernard signs a four-year contract with the Blues!

Will he be the last piece of transfer business by the Merseyside club before the window shuts in 10 minutes’ time?

We reckon there’s more to come…

Could the Toffees make a late splash?

While many of the EPL’s big guns appear to have either done their business, or are unable to get the players they want, one club looks like they might be able to make a late impact in the final minutes of Deadline Day.

Barcelona midfielder Andre Gomes has reportedly already had a medical ahead of a potential move to Goodison Park, while the Toffees have also been linked with a potential move for Chelsea defender Kurt Zouma.

Stay tuned. Everton could soon make a multi-player announcement, with the first three names mentioned above very close to signing.

Perez vows to ‘defend these colours’ at West Ham

New arrival at West Ham Lucas Perez looks happy to be at his new club, where he’ll hope to find more first-team opportunities in the coming weeks and months.

The Spanish striker says it’s “a big honour for me to be a part of this historic team”.

From now on I will defend these colours. It's a big honour for me to be part of this historic team. Let's fight together to reach our goals! ⚒⚽️💪🏼 #WelcomeLucas #HammerTime pic.twitter.com/DFtUIeVFrs

‘Kepa the keeper’ meets the press

Chelsea signed Spanish keeper Kepa Arrizabalaga from Athletic Bilbao for a colossal £71million yesterday, making him the most expensive goalkeeper in the world.

And today the new Chelsea number one was introduced to the media at a press conference. Here are a few choice quotes from the new keeper, courtesy of Chelsea’s Twitter account…

“Some players take more time to adapt, some less. I hope I will be able to adjust and adapt as soon as possible. I realise the game in England is different, but I have been given fantastic references by other Spanish players in this league.

“Over the next seven years, I expect to achieve a great growth, personally and collectively, and I hope we will win many, many titles.

“A new stage is starting for me, and I am really happy to start this new stage in my career and my life.”

Premier League new boys Wolverhampton Wanderers have already made a splash with their summer transfer dealings, and they’ve added another new signing to their squad.

Belgian midfielder Leander Dendoncker has officially signed on the dotted line and joined Wolves on an initial season-long loan from Anderlecht. The move is set to become permanent at the end of the 2018/19 season.

The 23-year-old has six international caps for Belgium and arrives at Molineux to bolster Nuno Espirito Santo’s midfield ahead of the new season.

Did United get played?

Sky Sports News have just reported that Godin’s agent approached the club and suggested the player was keen on a transfer. But when United looked to follow up on that supposed interest, Godin agreed terms on an improved contract with Atletico.

It looks very much as if Godin’s agent used United for leverage to get his man a better deal, and you can bet that won’t have gone down well with Jose Mourinho.

Courtois takes to the field at the Bernabeu

Big Belgian keeper Thibaut Courtois is officially a Real Madrid player, and the club’s official Twitter account has been pumping out various clips and pics of their shiny new signing.

We’ve seen him signing his contract alongside Real Madrid president Florentino Perez, and now we can see him taking to the field for the first time as a Real player.

The Bluebirds have secured the season-long loan of Real Betis midfielder Victor Camarasa, who trained with the squad today as his deal was being completed.

Now that deal is confirmed, Neil Warnock has another body for his midfield unit this season.

Maguire to Manchester? Sort of…

Leicester and England centre-half Harry Maguire has been strongly linked with a move to Manchester United, and Foxes boss Claude Puel has had a little fun at reporters’ expense during a press conference this lunchtime.

When asked whether Maguire would be going to Manchester, Puel said: “I can confirm that Harry is going to Manchester… but only for a couple of hours tomorrow. We lost Riyad (Mahrez), so it is important that we now hold on to our best players.”

Claude Puel had us going for a second there 😅#LCFC #MUFC pic.twitter.com/4CNaGefq0w

The two sides will officially kick off the EPL season tomorrow night at Old Trafford, and it seems Maguire will be taking to the field in Leicester blue… for now, at least.

Benkovic gives his first interview as a Leicester player

Leicester’s £13million man Filip Benkovic has sat down for his first official chat as a Leicester City player.

Courtois signs on the dotted line

The big keeper has signed his contract at Real Madrid and is set to be unveiled at the Bernabeu this lunchtime.

Kovacic can’t wait to get started at Chelsea

I am really happy and excited to be here @ChelseaFC. It is a privilege and an amazing feeling to be part of this club and I can't wait to start with trainings and matches. I will try to do my best for this club and hope to bring joy to our fans. pic.twitter.com/OMydrc2i3j

While the uncertainty over Harry Maguire’s future at Leicester continues, Foxes boss Claude Puel has taken the opportunity to land another central defensive player to bolster his back line.

Twenty-one-year-old Croatian defender Filip Benkovic has arrived at the club in a £13million deal, and has put pen to paper on a five-year contract with the Foxes.

No Godin move for United?

Earlier this morning hopes were high that Uruguyan defensive rock Diego Godin could be heading to Old Trafford, but it appears that Atletico Madrid star has agreed a new deal with the Spanish side.

What could have been one of the biggest Deadline Day moves now seems to be off.

Real Madrid midfielder Mateo Kovacic has pitched up at Stamford Bridge on a season-long loan.

The midfielder’s arrival is a makeweight in the deal expected to sent goalkeeper Thibaut Courtois to Real Madrid later today.

All confirmed! 📝@Mateo_Kova23 is a Blue for the season ahead! #WelcomeKovacichttps://t.co/Nqxf6cxxuN

Two Premier League sides have conducted transfer business, with Arsenal’s 29-year-old Spanish striker Lucas Perez heading across town to West Ham United in a deal believed to be worth £4million.

Is this the real life?
Is this just fantasy? pic.twitter.com/Wl0Ul9VifT

Manchester City have made the first move of Deadline Day, sealing the signing of teenage Australian winger Daniel Arzani from their sister club Melbourne City.

We are delighted to announce the signing of Daniel Arzani from @MelbourneCity! #mancity pic.twitter.com/55SoNc8qRK