The MacLifestyle – The Law of Attraction: What is it and how can you use it?
Press enter to begin your search
Lifestyle

The MacLifestyle – The Law of Attraction: What is it and how can you use it?

Is it actually possible that by thinking and obsessing over a thought so much, it can actually become true? Welcome to the law of attraction, the theory behind the claims. 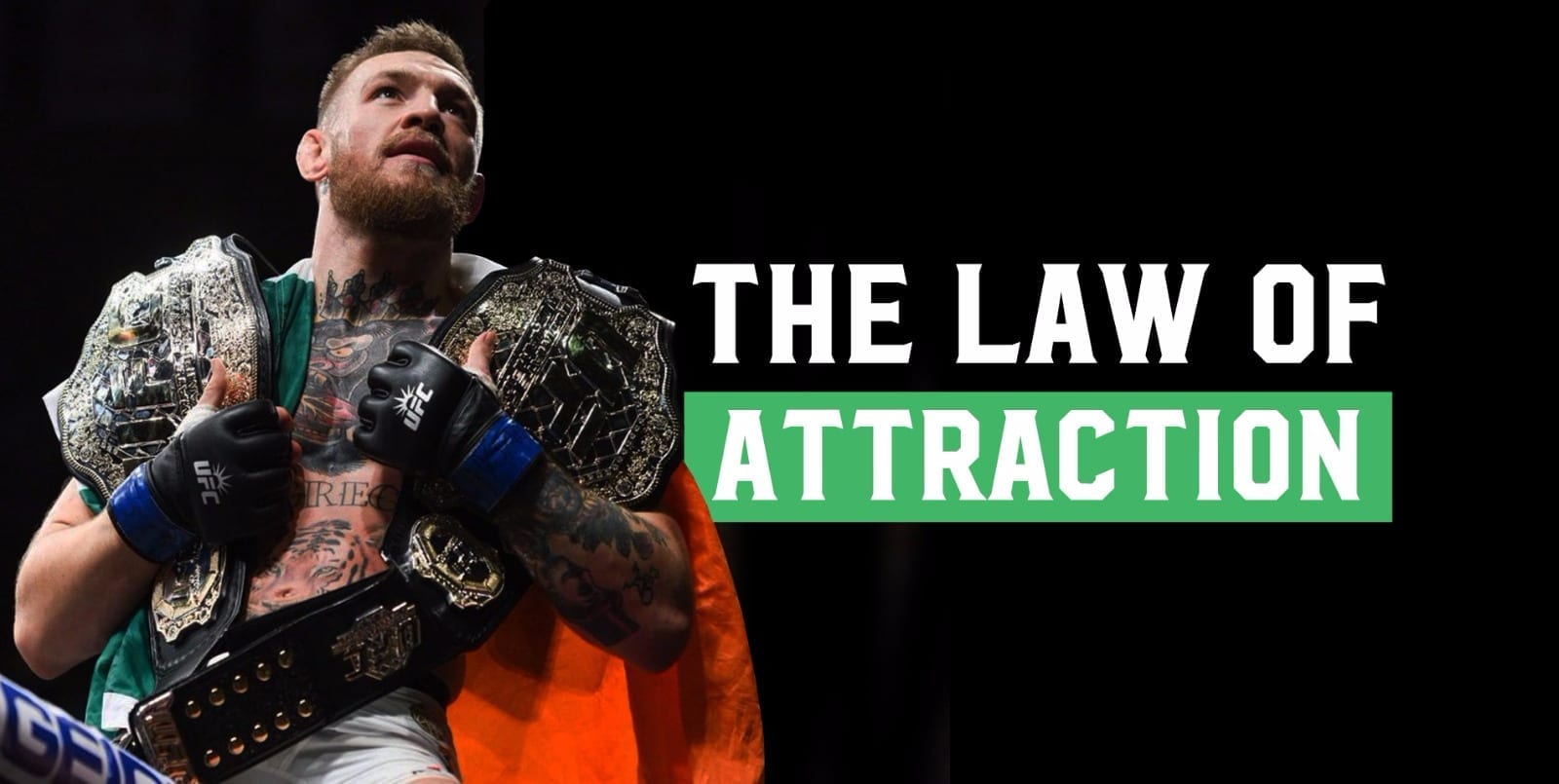 It’s well documented that Conor McGregor has always been a highly self-confident and ambitious fighter. It’s likely that you have at some stage stumbled across a video of the two-weight world champion talking about his clear visions of success and how he has famously ‘dreamed them into reality’. However, what exactly is Conor talking about here? Is it actually possible that by thinking and obsessing over a thought so much, it can actually become true? Well, welcome to the law of attraction, the theory behind the claims, writes Jamie Griffiths.

Just before Conor’s fight against Diego Brandao in Dublin, Conor sat in an empty stadium in Dublin with veteran MMA reporter Ariel Helwani and talked specifically about the law of attraction. Conor delved into his past and explained that, even though he had troubles at home, no job, nothing going for him, he was still be to imagine that times were good, he was able to imagine he was driving a luxury sports car rather than a dilapidated Peugeot 208. He then states that when someone is able to do such a thing, then this is what makes the law of attraction really work. People have the attitude that they ‘want’ something, but Conor has the attitude that he already ‘has’ everything.  This is a fundamental difference for him.

Critics of this approach would argue that you can imagine all you want, but if you don’t have the natural talent to back it up, then it will never work. However, Conor does not believe in ‘talent’, he believes that he is where he is today through hard work in the gym. This is also true for a number of other successful people today. Popular musician Ed Sheeran is a believer in the 10,000 hour rule. In order to become good at anything, you need to first put in 10,000 hours of work to get there. To support his point, Ed has shown people his singing voice when he was just starting his career. It’s fair to say it’s not the most pleasant sound.

Skip forward from the previous interview with Ariel, After winning the UFC featherweight title, when asked whether winning the title feels the way it should Conor replies:

“It feels beautiful, I dreamt this so much, so clearly, so precisely and so frequently that it has manifested itself into reality… From nothing, to something, to everything”

It doesn’t matter if your vision of the future isn’t as clear as Conor’s, you can still work towards achieving your goals through behaviour and your mindset. We have listed five key factors which will help you to achieve the law of attraction.

Have a goal in mind

In an ideal world, you will know what your passion is and so it will be easy for you to foresee your end goal. For example, the goal for a young Conor McGregor was to become a two-weight world champion in the UFC and to have more money than he knows what to do with. Like many, you may be someone who’s end goal isn’t as vivid as McGregor’s, instead you may have a ‘goal’ but do not yet understand the means by which you will get there. For example your end goal may be to one day own a successful profitable business but not yet know what the business will be. Alternatively, you may see yourself achieving a high powered position within a company, but at the moment you seem to be stuck in a dead end job with no clear career path. Instead of moping around hoping that the fog will clear and your path to success will appear, it is better to instead instil ‘successful traits’ into your everyday behaviour.

If you have a vivid image of becoming successful but you aren’t backing it up with hard work, the reality is that it won’t manifest itself into reality. Even if you haven’t you found your end goal, it is vital that you instal successful traits into yourself now. Hard work, a positive mindset and self confidence are all imperative in achieving the law of attraction. Hard work is a term which is overused but rarely achieved. Hard work means working harder than anyone else in a similar position to you. A positive mindset is needed in the dark times of your struggle. Self-doubt and negativity are only going to pull your backwards. You also won’t be able to achieve anything substantial if you aren’t your own biggest fan. No one is going to believe in you if you don’t believe in yourself.

Realise that you will suffer setbacks

No successful person has ever had a linear path to where the are today. Everyone has small patches in their life where they slow down or become in danger of falling away from realising their dreams. Just before getting his first UFC shot, Conor McGregor disappeared from the gym for a sustained period of time. If it wasn’t for John Kavanagh relentlessly calling his phone to tell him the news of his UFC debut, he may have continued to slide for some time. What is vital is to keep the self belief and not doubt yourself.

Accept that not everyone will believe in you

Take McGregor’s coach, John Kavanagh for example. After setting up Ireland’s first dedicated MMA centre in what was no more than a shed, he brought his parents to see all of his hard work. Upon seeing the shed John’s mother burst into tears and questioned what her son was doing with himself. Now after almost thirty years Kavanagh is running what many regard as one of the finest MMA centres in the world today. Not everyone is going to believe that you will succeed, but as long as you believe then nothing else matters.

Dedicate all your time to your passion

If you have found your passion then great, now start working on it every day. Even when you’re not performing tasks related to your passion, think about something related to the field. Conor also states in a separate interview that in order to make the law of attraction work, you need to be ‘a little bit gone’ to whatever it is you’re doing. In other words, you have to be obsessive over whatever you do. It has to be something you don’t switch off thinking about.