Neither Anthony Joshua nor Kubrat Pulev took a backward step at Friday’s weigh-ins ahead of their world title fight in London. 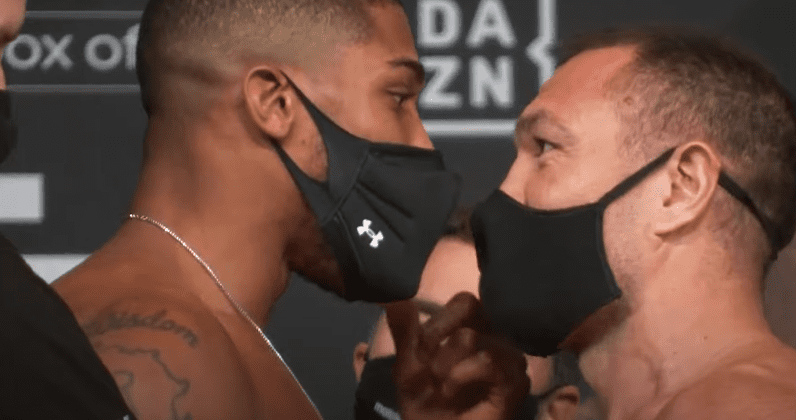 World heavyweight champion Anthony Joshua was in no humour to back down on Friday when he came face to face with the man attempting to seize the world titles from around his waist on Saturday night in London, Kubrat Pulev.

Joshua, the WBA, IBF and WBO champion, faces the considerable threat of the once-defeated Bulgarian in what many are seeing as the final step on the path before a massive world title unification fight with Tyson Fury next year but Pulev was resolved to show that he won’t be taking a backward step when they step into the ring.

What began as a standard weigh-in soon became a tense affair, with both Joshua and Pulev attempting to gain a measure of the front-foot before the first punch is thrown tomorrow.

“You talk too much, bro,” Joshua can be heard saying. “Whoever you’ve been in with, these fighters, you need to get into your head that you’ve got to fight with someone like me.”

“I respect you but tomorrow I will show you,” replied Pulev.

The usually reserved Joshua told Sky Sports afterwards that he would have liked to have clipped his opponent right then and there, but that there is a prize to be fought for tomorrow night which precludes any pre-fight brawls.

“I would have clapped him on his jaw, just then,” he said. “But I have to wait ’til tomorrow. I know what he is like. I’ve studied him. He thinks he’s a warrior.

“I said to him: ‘Don’t let the guys that you’ve fought gas you up, you’re against a real one now’. When people come in the ring with me, they are confident. After a few rounds their soul is destroyed. Once I see that, I can take him out. We are big boys. We punch heavy. First man to land will be the last man standing.”