Do you think you know how the UFC 248 co-main event is going to play out? 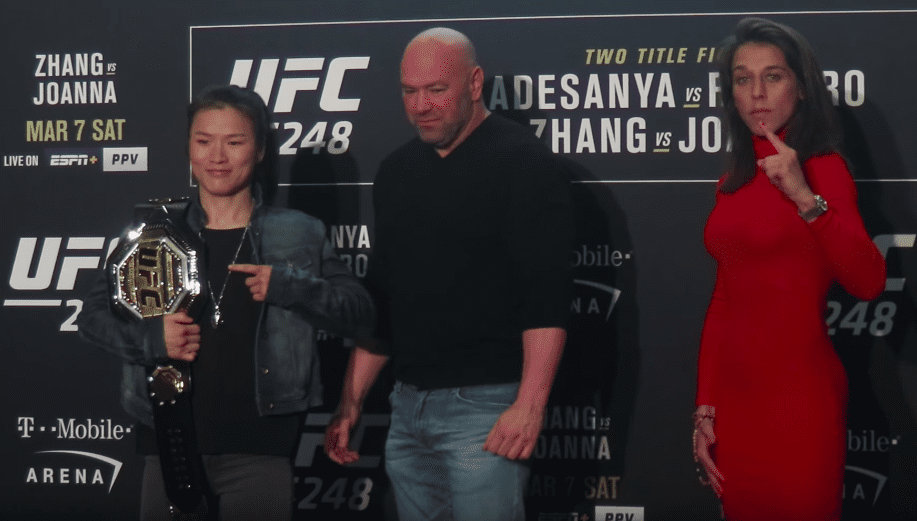 Joanna Jedrzejczyk is in a do or die situation this weekend against China’s first-ever UFC champion Zhang Weili.

Defeat for the Pole would represent her fourth straight loss in a UFC championship bout after two defeats to Rose Namajunas at strawweight and another to Valentina Shevchenko at flyweight. Gone are the days when Jedrzejczyk was considered to be at the summit of the women’s game, with that reputation having been ceded to the likes of Shevchenko, Amanda Nunes and, more recently, the woman she will attempt to seize the title from this weekend, Zhang Weili.

And the odds are stacked against her.

Zhang Weili, 20-1 in her professional career, hasn’t been defeated since the date of her MMA debut back in 2013 and has looked to have no equal since making her first UFC appearance in August 2018. As if to emphasise this point, she needed no more than 42-seconds to win the title in a vicious performance against former champ Jessica Andrade a few months back.

Check out the stats for this weekend’s co-main event between Weili Zhang and Joanna Jedrzejczyk! Who’s your winner from this clash at #UFC248? 👊 . Bet on the King with Parimatch 👑 Register and get your EPIC bonus now. Link in bio . #themaclife #ufc #ufcnews #mmanews #mma #mixedmartialarts #fightgame #ufcfans #fightfans #ufc248

Jedrzejczyk possesses all the necessary skills to win. She has laser-sighted striking and cuts an extremely aggressive figure in the cage, but will she be able to use this tactic against the similarly-aggressive Zhang? The fight could well be won or lost by whichever of the two fighters is better able to adapt to the other’s pressure, with both women likely having to fight on the back foot at one point or another.

The Chinese has gone to decision in just three of her twenty wins, underling her finishing ability and Jedrzejczyk, despite her excellent arsenal of strikes, tends to be more of a volume fighter — overloading her opponents with strikes from different angles.

The winner, you feel, will be the fighter able to take the other out of their comfort zone.

A pretty simple message from @zhangweilimma to @joannajedrzejczyk: “shut up!”

According to the oddsmaker Parimatch, the champion is the slight favourite to defend her crown — but Jedrzejczyk’s chances cannot be discounted.

As we mentioned, Jedrzejczyk has become increasingly dependent on decision wins and it now almost five years since she finished a fight inside the distance and this remains her most obvious method of victory on Saturday night.

Zhang Weili, meanwhile, boasts 10 KOs or TKOs on her record, as well as seven submissions, suggesting that she is the more likely of the two to win the fight without the assistance of the judges.

Such has been the dominance of Zhang Weili since she debuted with the UFC that is is difficult to see any other winner in this fight, despite Jedrzejczyk’s obvious talents. The Pole is very much a live underdog in this fight but the smart money is on the Chinese extending her winning streak by third round TKO and dealing a blow to Jedrzejczyk’s title aspirations.