Floyd Mayweather is unimpressed with Dana White’s continued suggestion that the boxer may fight in the UFC. 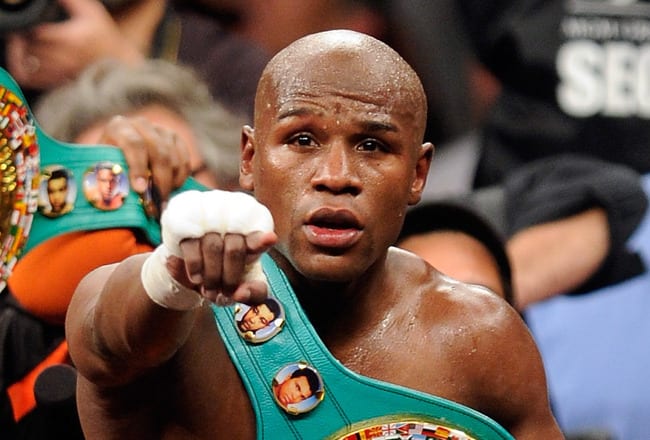 Floyd Mayweather has had just about enough of Dana White suggesting the boxer could be en route to a fight in the UFC.

Over the past couple of weeks, there has been a continuing story that Mayweather could be interested in returning from his retirement to swap his boxing gloves in for that of the 4oz mixed martial arts gloves. Even as late as yesterday, the UFC president declared he wasn’t ruling anything out as far as a potential crossover.

That, apparently, was enough of that. Today, Mayweather spoke to FightHype.com to reveal his belief that White’s recent talk of Mayweather stems more from the fact the UFC is currently in negotiations for a new television deal, and is merely a ploy to drum up interest.

“Their deal with Fox is coming to an end,” Mayweather said. “So they’re trying to renew a new deal witha ny company what better name could they use than Floyd Mayweather? Because that’s a great name to use. I would use a Floyd Mayweather so I could leverage also and say ‘you know what? Floyd’s gonna come back, he’s going to fight in the UFC’. Floyd’s gonna come back and he’s gonna fight McGregor in the Octagon. So they can leverage and get another big deal.
“I don’t have anything against Dana White. At all. He’s a remarkable guy, a very, very smart guy. Smart business man. I don’t need to fight again. If I chose to fight in the Octagon, I’m choosing to fight in the Octagon because that’s what I want to do. … If it didn’t come from my mouth or Al Heymon’s mouth, then it’s bullshit. It’s bullshit.
“The UFC, their deal, their television deal, is coming to an end. Floyd Mayweather is a good name that they can use to leverage with to get a new deal. Let’s not be stupid. So I’m not fighting, I don’t have no boxing opponent I’m looking forward to. I’m not calling no names out in the sport of box. I’m not calling any names out in the UFC.”

Mayweather continued on, focusing his rant towards White in particular.